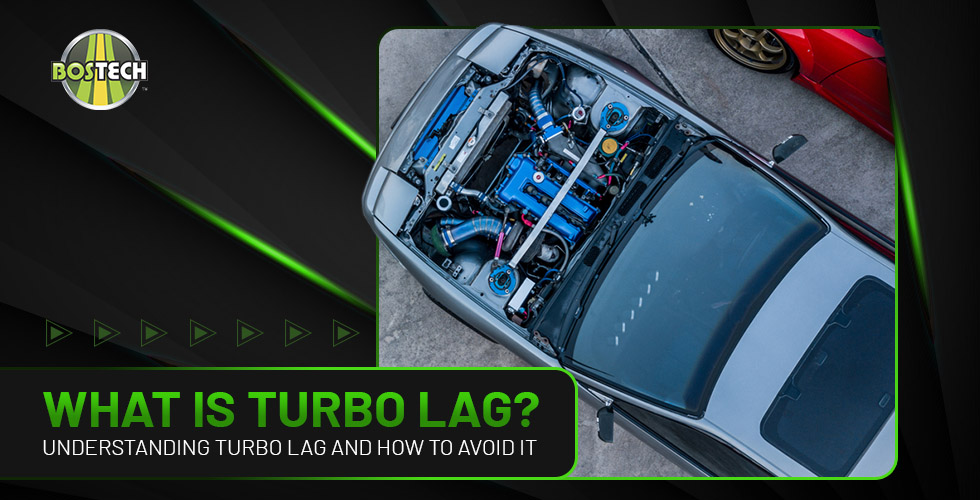 When you push the throttle on a turbocharged engine, it may take a few seconds for the torque to kick in. This is what’s known as turbo lag. You should be able to rely on your turbo when you need to accelerate quickly. If the turbo lags, you will need more time to increase your speed. This can suck some of the fun out of driving for those that like to feel the torque beneath their feet. It can also lead to poor time efficiency when using these vehicles for mechanic work. If you’re turbo is starting to lag, learn more about this issue and how you can avoid it all together.

Why are so many cars and trucks Turbocharged?

Turbocharged vehicles offer better fuel efficiency and faster acceleration. A turbocharged engine uses a turbine-induction system to power the vehicle. The turbine mixes recycled exhaust into the engine’s combustion chamber. This creates up to 50% more airflow than traditional engines. Turbocharged engines can also be smaller than regular engines while producing the same amount of power, which allows for faster and more powerful acceleration. 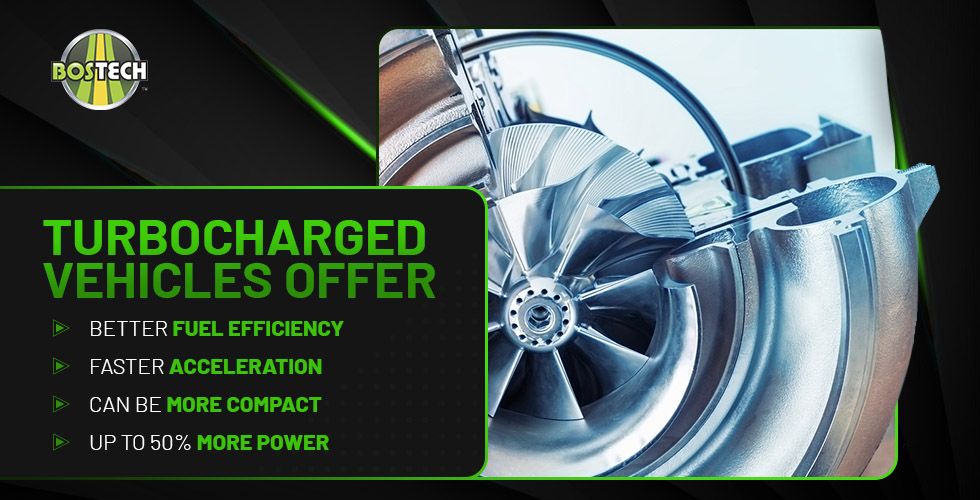 Exhaust enters the turbocharger, which spins the turbine. The turbocharger can reach peak speeds up to 150,000 or even 250,000 rotations per minute (RPMs), which is about 30 times faster than a typical engine spins. Once it reaches the proper speed, it gets sucked up into the compressor, which also spins. The compressor then forces the recycled exhaust into the cylinders connected to the combustion chamber. The more air coming into the chamber, the more power the engine will produce.

The turbocharger can add about 50% more power to an engine, depending on the make and model.

What is Turbo Lag?

As you can see, the turbocharger is made up of several moving parts. The entire process may take several seconds to complete. It starts when you first press on the throttle and ends when you feel the torque as the engine accelerates quickly.

When turbocharged engines first hit the market, turbo lag became a noticeable problem. Many companies and riders complained of increasing lag as time went on.

Manufacturers eventually found solutions to the problem as the years went on. Today, better quality auto parts, including exhaust systems and the Cummins EGR cooler, have resulted in less turbo lag, but the problem can still creep up from time to time.

The lag occurs when the exhaust system needs time to build pressure to spin the turbine. Once the turbo reaches the required speed, usually measured in RPMs, it can start to force air into the compressors.

The lag tends to be longest when in a low-RPM, low-load cruising situation. This is why you won’t get a full a boost when idling. If you’re wondering why you can get max torque in these situations, remember that the turbo, like all engine parts, has to reach a certain RPM to function correctly.

If the turbo were small enough to reach maximum speeds under low-RPM situations, it would likely explode under pressure as soon as you reach maximum throttle. The opposite is true as well. If the turbo waited until the engine was at maximum RPMs, it wouldn’t provide any boost.

That’s why most turbo systems land in the middle these two extremes. The turbine will run even when idling, but it won’t be effective until the exhaust reaches a certain speed. There is no set rate at which all turbos run. Different turbos run at different RPMs. 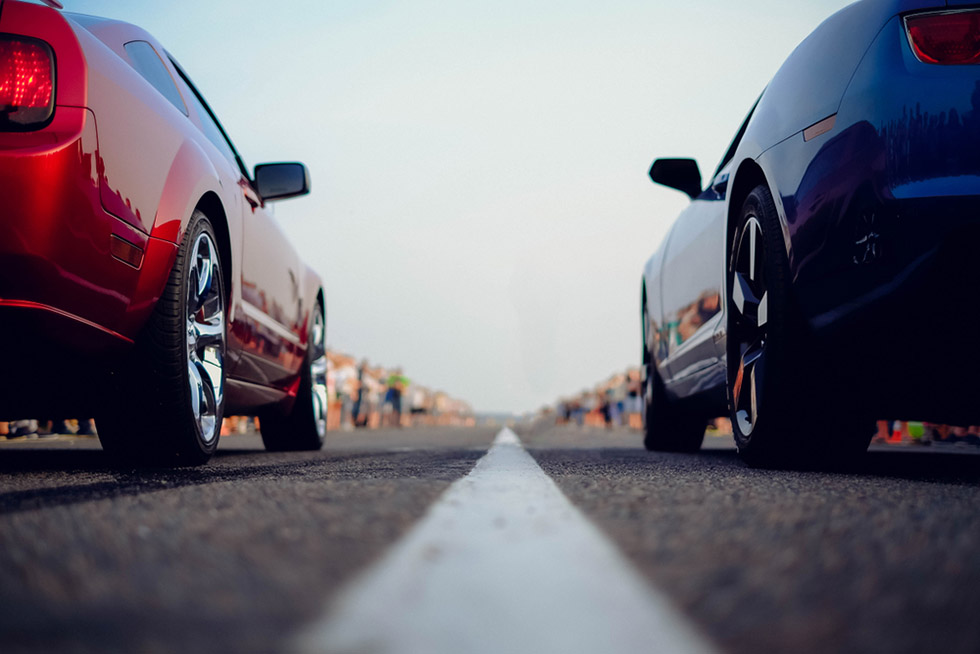 If you’re wondering how the lag feels beneath your feet, it may be imperceptible at first but may get worse over time. Typically, you will press down on the throttle or accelerator, but you won’t feel a boost right away. Your vehicle should reach the desired speed several seconds later.

You may be used to feeling a sudden bolt of acceleration as soon as you hit the gas, but turbo lag will chip away at this effect as the problem gets worse. This can make driving less enjoyable for some. It can also be a sign that your turbocharger isn’t living up to its full potential.

How to Avoid Turbo Lag

There are many factors that can affect the amount of time it takes for your turbocharger to jump into action. Use these tips to keep turbo lag at a minimum: 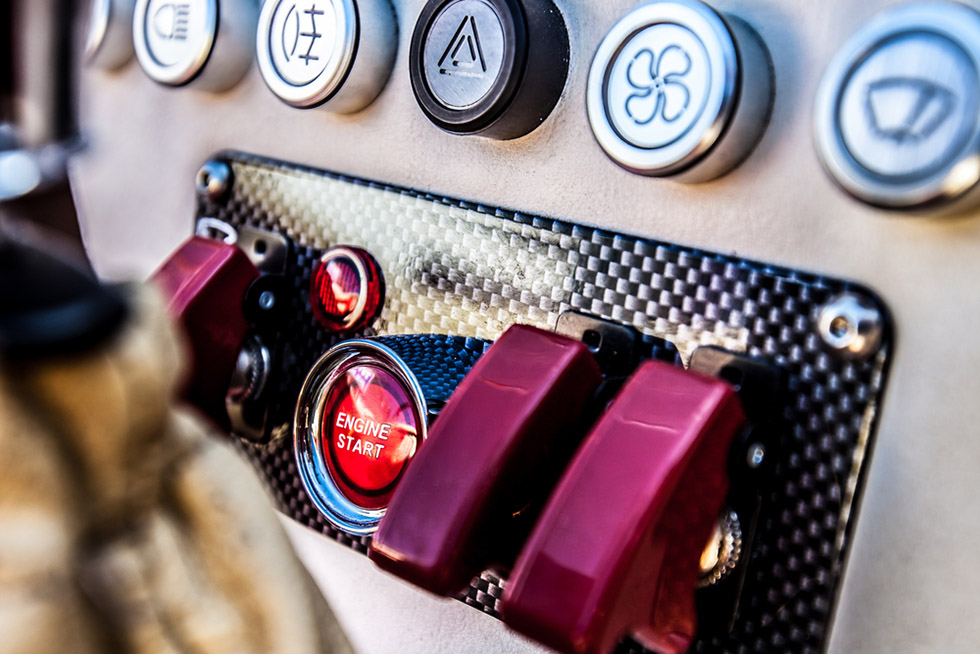 Many drivers use nitrous oxide to add additional pressure to the combustion system. Nitrous oxide is made up of two parts nitrogen and one part oxygen. When it gets released into the chamber and burns at temperatures up to 300 degrees Fahrenheit, the nitrogen breaks down, which releases more oxygen into the air. This ramps up cylinder pressure, giving your exhaust system the boost it needs to get the turbine running. This can reduce turbo lag by a factor of 4.

However, your cylinder needs to retain the proper fuel-air ratio. If you use too much nitrous oxide, you could see a major backfire or even damage your engine.

Turbocharged engines use recycled exhaust air. This means that the air is already pressurized when it goes into the combustion chamber. To account for this, many engines operate at a slightly lower compression ratio, usually 8:1 or 8.5:1, so the cylinder doesn’t get too hot when the added boost comes in. The higher the boost pressure, the lower the compression rate.

As this technology improved, some turbocharged engines are ratcheting up to 9:1 or even 10:1, which helps improve efficiency. These engines produce more power, helping you reach the right speed at the right time.

Turbo lag usually comes from a disconnect between the turbine and the compressor. These components don’t share the same geometry and usually come with a different speed range of operation. This can lead to all sorts of problems when using the turbocharger.

If the geometry of the turbine, also known as the flow area, matches the full speed and load of the engine, the turbocharger will be slow to respond at low and medium speeds. On the other hand, if the geometry or flow area is small for a faster response, you might reach the choke limit, the turbocharger might overspeed, or the intake air pressure may exceed the maximum limit.

The turbo should be able to supply the proper exhaust intake pressure regardless of the operating speed of the compressor, so it can deliver a proper boost. But this is nearly impossible with a fixed geometry turbo, as the speed of the turbo relies on the flow of the exhaust. 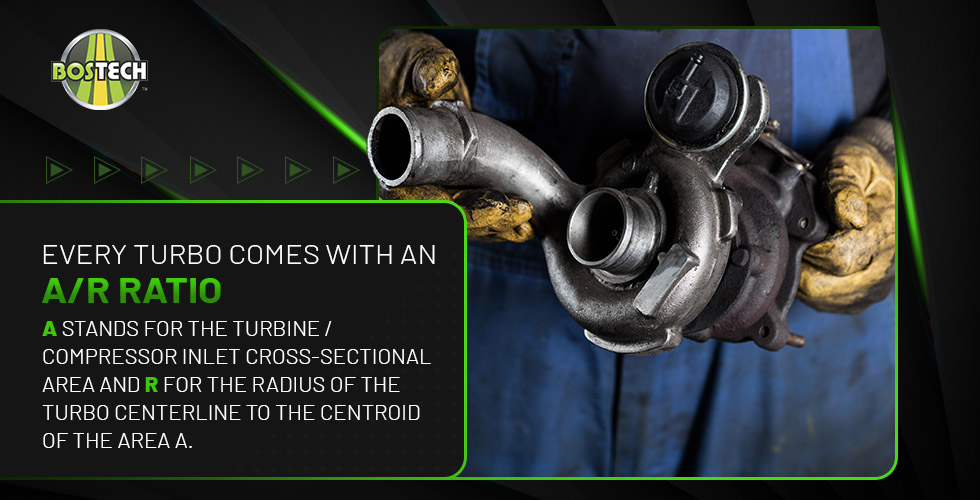 Every turbo comes with an A/R ratio. A stands for the turbine/compressor inlet cross-sectional area and R for the radius of the turbo centerline to the centroid of the area A.

These ratios relate to both the turbine and the compressor, but the A/R ratio of the turbine will have a major effect on turbo performance. A/R ratios affect the flow of the turbine, which is crucial for getting a boost.

A small A/R ratio increases the speed of the exhaust gas as it enters the turbine wheel, which causes it to spin faster for a better boost. However, a small A/R ratio also reduces the flow capacity of the turbine, which often leads to increased back pressure in the exhaust manifold at high engine speeds, poor gas exchange, and reduced power at peak speeds.

Shop for Diesel Parts That Keep Turbo Lag at a Minimum

A large A/R ratio improves turbine flow at high speeds, reducing back pressure in the exhaust manifold. This also creates a better gas exchange for more peak power. However, this will also decrease the speed of the exhaust gas as it enters the turbine wheel, which results in a slower boost, or turbo lag, at low to medium speeds.

So, how do you get the compressor and turbine to work together, especially at low speeds?

Variable geometry turbos are here to solve the problem.

They use variable A/R ratios to adjust intake pressure and flow based on the speed of the engine. They essentially combine the benefits of small and large A/R ratios into a single unit for better gas exchanges and a faster boost.

The A cross-section will adjust while the R will stay the same to adjust the flow and intake pressure based on what’s happening with the compressor. 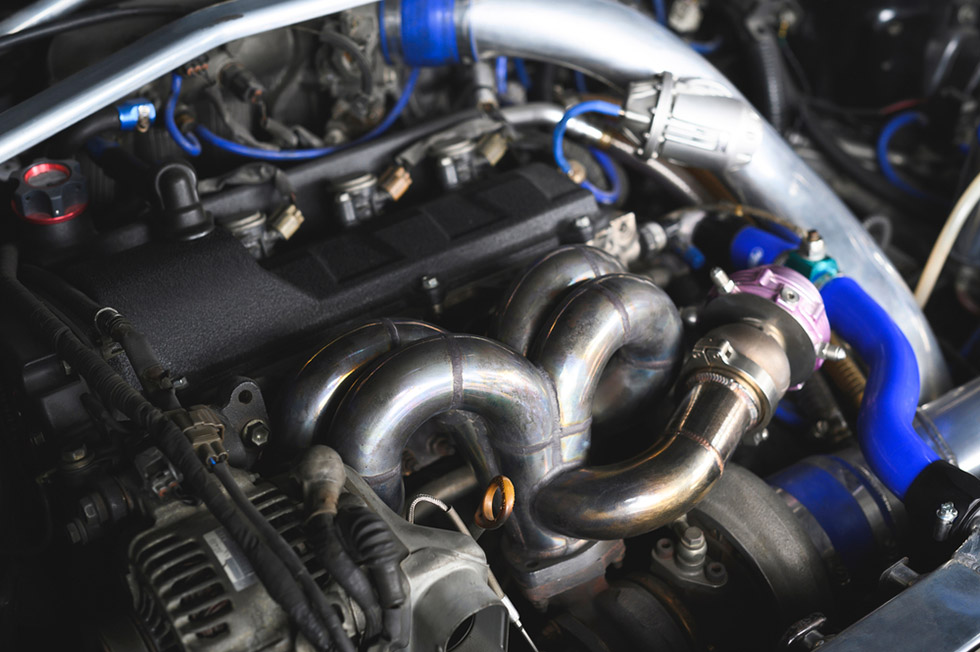 A wastegate controls the flow of exhaust gases into the turbine in a turbocharged engine. You can add a smaller exhaust housing to increase pressure, which can help reduce turbo lag. You can also use an exhaust wastegate that will bleed off excess exhaust pressure at high RPMs, so the turbo doesn’t have to spin as fast to deliver a boost.

There are usually three or four different exhaust housings per turbo frame, so you should be able to find the right size and shape based on your needs.

Many diesel engines use sequential turbocharging to reduce turbo lag. These systems essentially combine two different types of turbo chargers, a small one for making power in the 2,000 to 4,000 RPM range, and a slightly larger one that will work in the 4,000 to 6,000 RPM range. This increases the operating powerband, but these systems tend to be expensive and difficult to maintain. 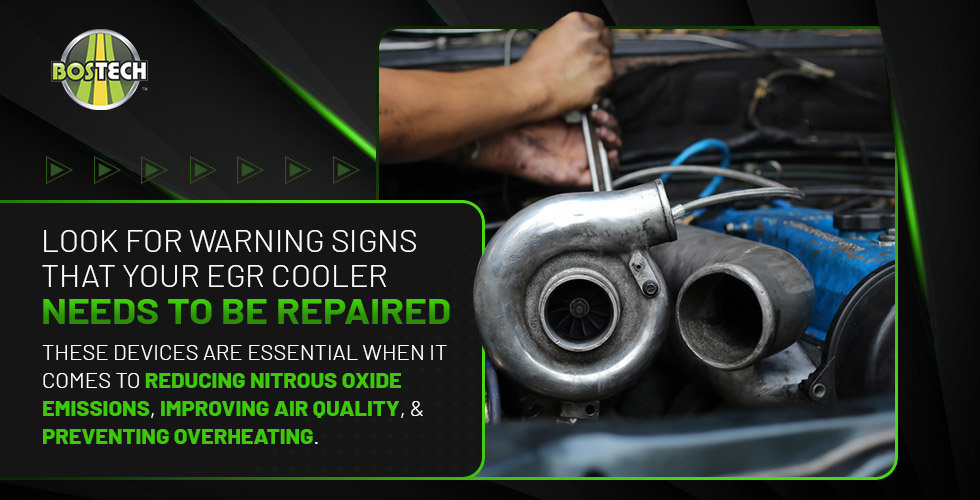 The EGR cooler may be contributing to turbo lag. If high-pressure exhaust gas escapes the seal on the cooler, the turbocharger will need more time to give the engine a boost.

Look for warning signs that your EGR cooler needs to be repaired. These devices are essential when it comes to reducing nitrous oxide emissions, improving air quality, and preventing overheating.

This simple part is designed to relieve excess valve pressure that will affect the performance of your turbo. At high speeds, the actuator will divert excess pressure away from the turbine, so it matches up with the compressor for a faster gas exchange.

These tips are designed to help you make the most of your turbocharger. You can get a boost at any speed without worrying about damaging your engine or increasing back pressure in the exhaust manifold. It’s all about understanding how the turbocharger works and how it can be improved.