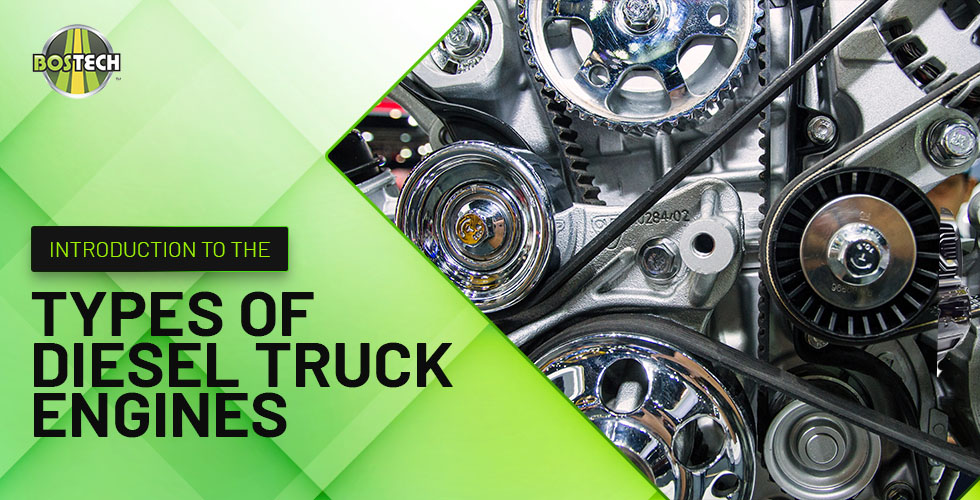 The world runs on diesel. Diesel engines power all kinds of large industrial vehicles, including buses, ships, trains, and trucks. They are the preferred choice when it comes to towing, hauling, and lifting. But not all diesel truck engines are created equal. Some drivers and towers swear by certain types of diesel engines, while others shop around for the best deal. But each type of engine comes with its own pros and cons. Learn about the different types of diesel truck engines and how they’re used in various industries today.

What is a Diesel Engine?

Let’s start by defining a diesel engine. Diesel engines use compressed air and fuel to start the internal combustion process. The fuel ignites when it interacts with a high-temperature highly compressed gas mixture containing oxygen. This is what’s known as the diesel cycle, which is named after Rudolf Diesel, who invented the first diesel engine in 1892. The process converts chemical energy into mechanical energy, which then powers the vehicle.

Traditional gas-powered vehicles also use internal combustion, but instead of compressing the air and fuel, they use spark plugs to ignite the fuel. Diesel engines are more powerful than gas-powered engines and produce more energy with the same amount of fuel because the heat stays in one place.

How Does a Diesel Engine Work?

All diesel engines consist of at least one piston and one cylinder. They operate using a two-stroke or four-stroke cycle. The main difference between gas-powered and diesel engines is that diesel engines induce the compressed air during the intake stroke. The energy is created when the burning fuel is injected or sprayed into the hot, compressed air in the cylinder. The air must be hot enough to ignite the fuel or the combustion process won’t work. Air temperatures usually reach 526 °C (979 °F) or higher. The cylinder can produce additional heat as well. 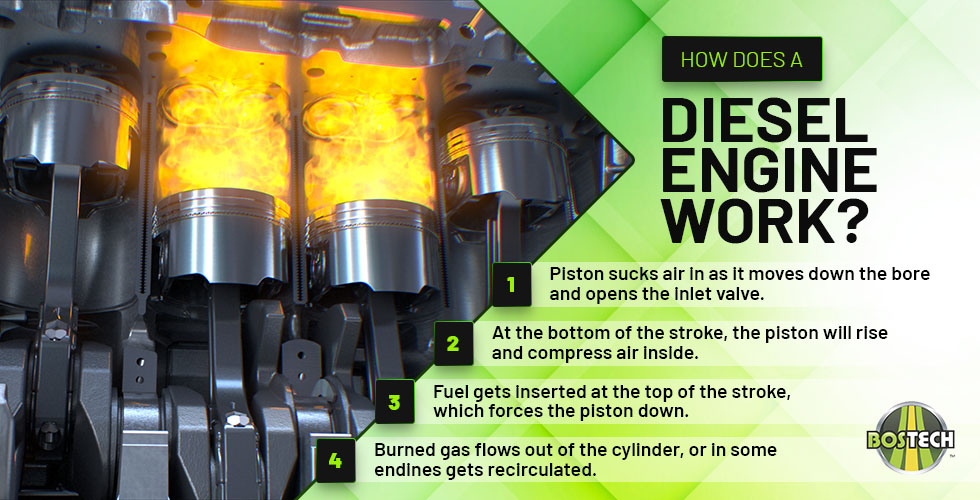 During induction, the piston sucks air in as it moves down the bore and opens the inlet valve. Air pressure should be between 1.7 and 2.4 megapascals when it gets inducted into each of the cylinders.

Once the inlet valve closes at the bottom of the stroke, the piston will rise and compress the air inside. The air doesn’t mix with the fuel until it reaches the cylinder. Compressing the air helps prevent pre-ignition problems that are mostly found in high-compression spark-ignition engines.

Diesel engines use fuel-injection systems that produce injection pressures between 7 and 70 megapascals (1,000 to 10,000 pounds per square inch). Fuel gets inserted into the cylinder at the top of the stroke, which then forces the piston down, allowing for ignition. The fuel then mixes with the hot, compressed air, where it ignites upon impact. The fuel injection process must be precise. Injection must begin when the piston is near top dead center.). The fuel is burned in a nearly constant-volume process while the piston is open. As the piston moves away from this position, fuel injection continues as the injectors supply near constant pressure.

There are different kinds of fuel injection systems. Direct injection is the most common. This means the fuel gets injected directly into the combustion chamber directly above the piston.

During combustion, the piston will move upward, so the exhaust valve can open, which lets the burned gas flow out of the cylinder. Many diesel engines use an after-cooling system known as exhaust gas recirculation (EGR). The exhaust gas gets recirculated instead of leaving through the exhaust. The EGR system then pumps coolant near the gas to transfer excess heat to the radiator where it gets burned off naturally. EGR reduces the amount of NOx emissions that reduce air quality and increase pollution.

The EGR is about more than just reducing harmful environmental toxins. It will also help you prevent excess wear and tear. Too much heat can damage your engine. The EGR cooler lowers the temperature of the exhaust fuel to keep the fuel from damaging internal parts and components.

Many diesel engines are also turbocharged, which provides additional power and improves fuel efficiency. The air compressor or blower increases the amount of compressed air in the cycle, which lets the engine burn more fuel per cycle for an extra jolt of power on the road. 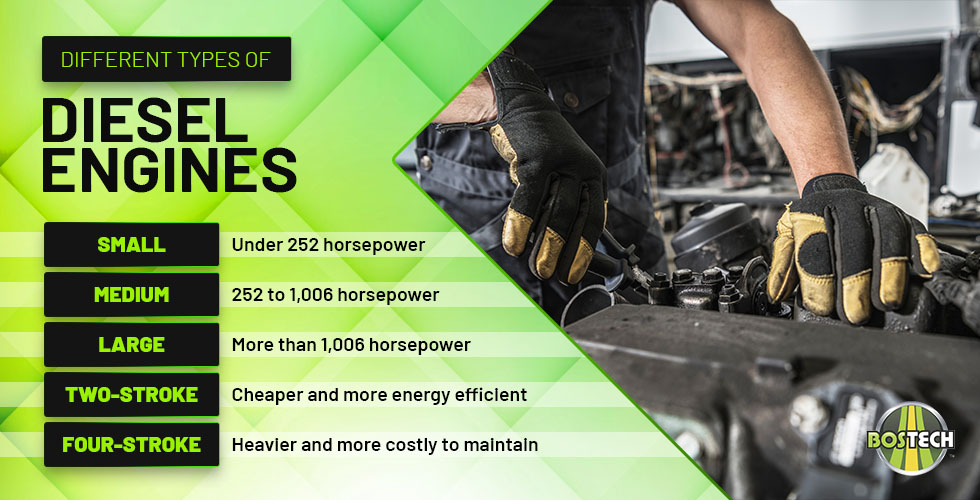 There are several ways to categorize diesel engines. They are usually listed as small, medium, or large based on power output.

Most diesel engines are small, which means they have power-output values of less than 188 kilowatts, or 252 horsepower. They are commonly found in trucks, automobiles, agricultural equipment, and some generators. They are typically direct-injection, in-line, and have four- or six-cylinders. Many are also turbocharged and come with exhaust aftercoolers.

Medium-sized engines have power-output values of 188 to 750 kilowatts, or 252 to 1,006 horsepower. They are most often found in heavy-duty industrial trucks. They are usually direct-injection, in-line, and have six cylinders. They are also turbocharged and aftercooled. Some V-8 and V-12 engines also belong to this size group.

Large engines come with power-output values of more than 750 kilowatts. They are often found in large industrial vehicles, including locomotives and marine vehicles as well as large-scale generators. They also tend to be direct injection, turbocharged and have aftercooled systems.

You can also list diesel engines based on whether they have a two-stroke or four-stroke cycle.

These engines are also more energy efficient. They produce power once for every rotation instead of once every two rotations, which is the case for four-stroke engines. However, that can also put more wear and tear on the cylinders, which usually requires more aftercooling and lubrication. You will need to replace your diesel parts more often than you would if you were using a four-stroke.

Most diesel engines are four-stroke, including the ones you find in most automobiles.

What is the Best Diesel Truck Engine?

Now that you know a thing or two about diesel engines, let’s look at some of the leading makes and models on the market today and what makes them so popular.

Cummins has been making reliable diesel engines for the Dodge RAM line of trucks for years. In 2008, the company released the 6.7L Cummins to replace the 24-valve 5.9L Cummins to comply with the country’s latest emission standards. It was rereleased in 2013 with SCR (Selective Catalyst Reduction), an advanced form of aftercooling that reduces the amount of harmful toxins in the air. SCR injects a special liquid reductant, usually Diesel Exhaust Fluid (DEF), into the exhaust stream, which sets off a chemical reaction that converts nitrogen oxides into nitrogen, water, and tiny amounts of carbon dioxide (CO2), natural components of the air we breathe, which is then expelled through the vehicle tailpipe.

Today, the 6.7L Cummins is considered the best diesel engine for towing. It produces peak torque of 1,075 lb./ft.

You will still need to replace your EGR cooling system after a while, especially if you are doing some heavy towing. If you are still using the 5.9L Cummins, find a new EGR Cummins cooler online to reduce the amount of NOx emissions coming out of your tailpipe. The 5.9L was known for having a defective cooler, which is why the company decided to upgrade it in the first place. 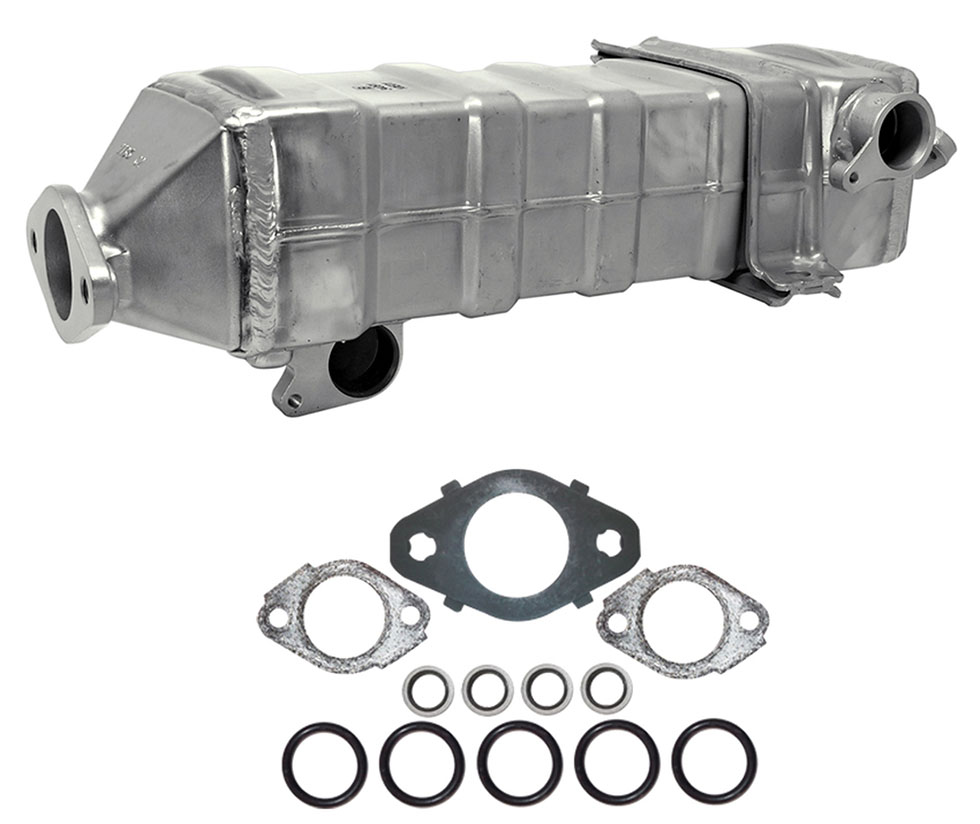 The EGR cooler on the 6.7L Cummins is much more reliable than the one on the 5.9L, but you may still run into issues from time to time. Find a replacement Cummins 6.7L EGR cooler to resolve the issue.

If you’re driving a Ford truck, you can’t go wrong with the 6.7L Power Stroke. Ford used to partner with International Navistar when developing its engines, but the 6.7L is the first design the company made all by itself. The new version resolves many of the problems that were found in the 6.0L and 6.4L Power Stroke engines. It can produce up to 475 HP, and 1,050 lb./ft. of torque. It’s considered the best engine for Ford trucks. 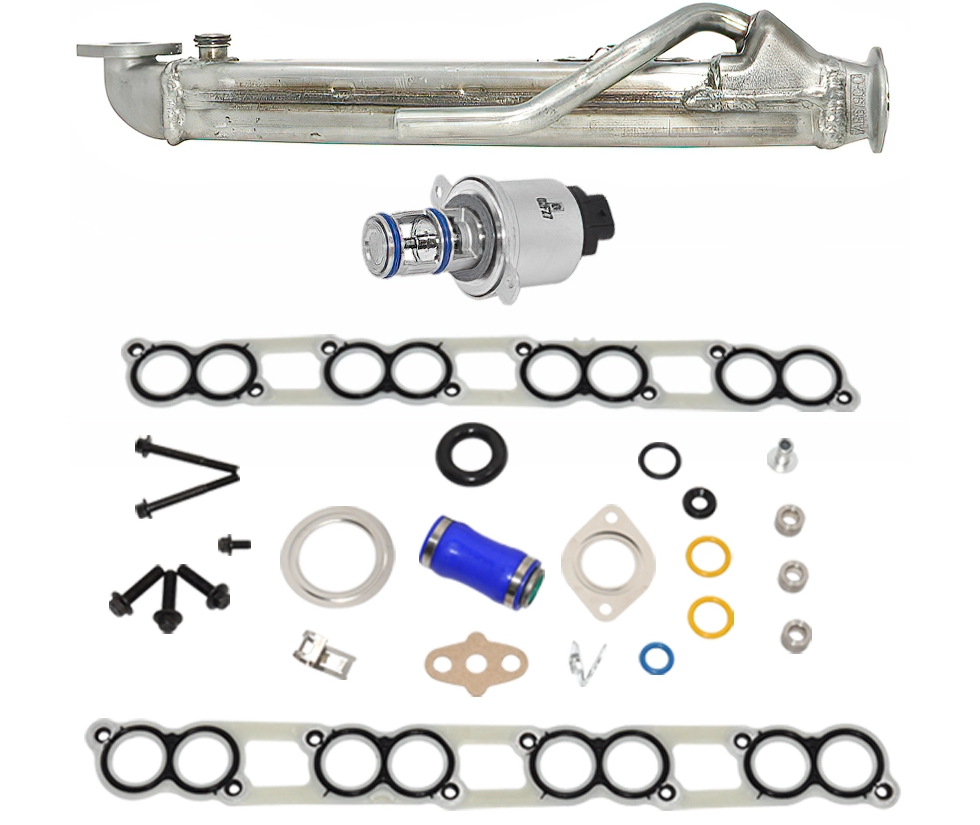 If you are still using the 6.0L Power Stroke, your EGR cooler will likely fall apart over time. The seals could leak coolant into the exhaust as blue smoke comes out of your exhaust. The excess heat will only damage your engine over time. Find a replacement 6.0L EGR cooler online to keep your exhaust the right temperature.

If you are looking for the most reliable diesel engine on the market today, you will want the 7.3L Power Stroke engine. Ford once again partnered with International Navistar to create a signature line of diesel engines for heavy-duty trucks. This engine uses Hydraulic Electric Unit Injection (HEUI), which eliminated the need for a dedicated injection pump. It uses high pressure engine oil to create hydraulic pressure within each injector.

If you’re driving a Chevrolet or GMC truck, you will need to go with the 6.6L Duramax. It was introduced in 2017 as a way of helping the company stay relevant in the diesel market. It comes with revised cylinder heads, an updated camshaft, and a new variable-vane turbocharger for better fuel efficiency on the road. It gets a total of 445 horsepower and 910 lb./ft. of torque.

The diesel engine has come a long way since it was first invented over 100 years ago. Keep these diesel engines in mind when looking for the best truck money can buy.