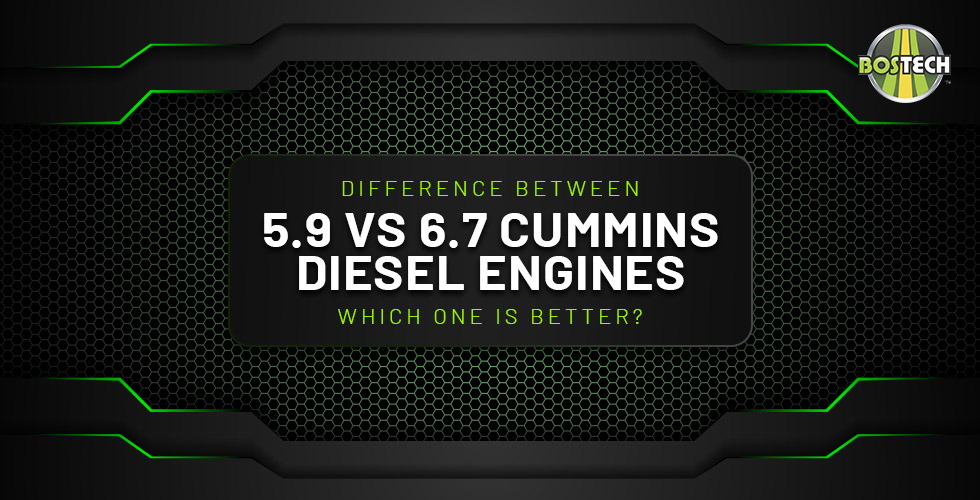 If you’re going to drive a RAM diesel truck, you will have to choose between a Cummins 5.9L and 6.7L engine. Both have been around for a number of years and they each have their fair share of devoted fans, but they offer different benefits on the road. The 5.9 Cummins comes with better fuel economy and is known for its lasting durability, but the 6.7 offers more towing power with a variable geometry turbo for faster response times. You can’t go wrong with either option, but you need to make sure you choose the right type of engine for the task at hand, or you could run into problems behind the wheel. Learn more about these two engines and how they’re used in the industry today.

The 5.9L Cummins has been around since 1989 and a lot has changed since then. The original 5.9 was known for its durability and simplicity. It comes with 12 valves and not a lot of electrical components. It was built before diesel manufacturers started filling engines will all kinds of smart sensors and electronic inputs to reduce exhaust emissions and improve performance. That’s partly why the 12V 5.9 engine has been in the game for so long. These components can fail over time, and using a simple engine means you don’t have to worry about replacing as many parts.

The 12 valve 5.9 Cummins was eventually replaced with the 24 valve version in 1998. It featured an intercooled Holset turbocharger unit with a Bosch electronically controlled rotary injection pump. Cummins finally swapped out the rotary injection pump for a high-pressure common rail solution that improved performance. Many drivers still prefer the simplicity of the 12-valve 5.9, but the 24 V offers better stock output if you don’t feel like dressing your engine with a lot of aftermarket parts and accessories. It also produces slightly more power than the 12 V with 235hp and 460 lb-ft. The common rail solution boosted power to 305hp and 555 lb-ft. when it was introduced in 2003. It went up again a year later, reaching 325hp and 600 lb-ft. in 2004.

Be sure to note which version of the 5.9 Cummins you have in mind. Both options will serve you will, but some prefer the added durability of the 12 valve, even though it’s now over 30 years old. The 12 V comes with its fair share of issues, including problems with the steel dowel pin, P7100 overflow valve, transmission, throttle position sensor, and heater grid. Meanwhile, the 53 block on the 24 V tends to be the biggest issue. You may also run into problems with the fuel injectors, exhaust manifold, and pedal position sensor. Overall, both the 12 V and 24 V 5.9 Cummins are known for their reliability and should last beyond 300,000 miles. 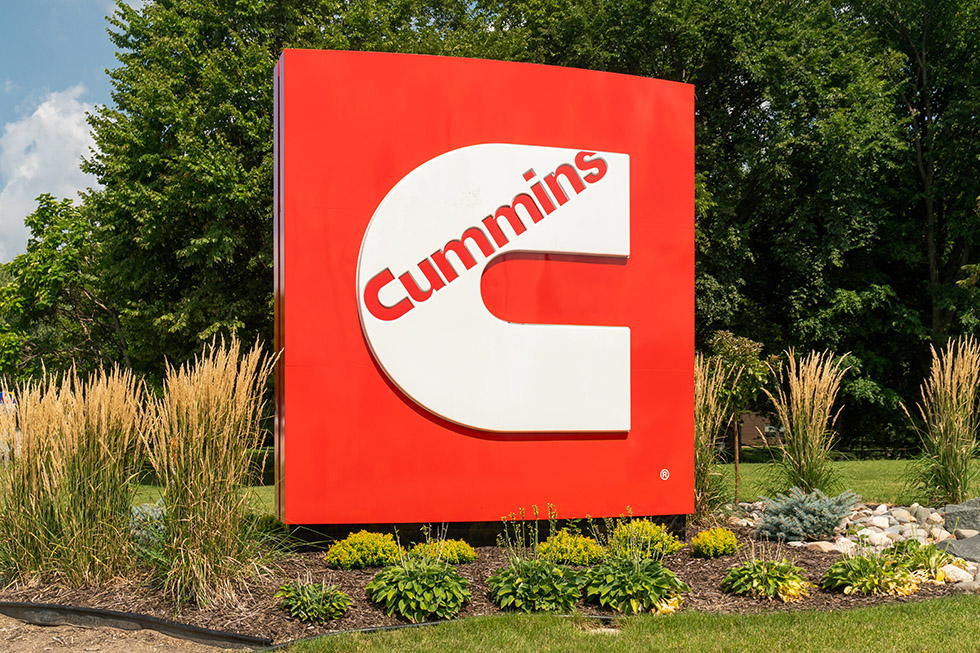 Cummins eventually replaced the 5.9L with the 6.7L engine in 2007 mainly to comply with changing emission standards. The 6.7L uses several exhaust reduction techniques to reduce pollution and NOx emissions. That means there are a lot more parts and sensors to keep track of and more possible issues to fix. But that doesn’t mean the 6.7 isn’t worth it.

The 6.7 Cummins used just about every emissions reduction technique in the book, including an exhaust gas recirculation (EGR) cooler that reduces the temperature of the exhaust gas before it reenters the combustion chamber. It also uses a diesel particulate filter (DPF) that collects and removes particulate matter from the exhaust gas. In 2013, Dodge added selective catalytic reduction (SCR) to the mix, which is when diesel exhaust fluid (DEF) gets injected into the exhaust gas to reduce NOx emissions.

These components are now required in modern diesel engines. They reduce the spread of environmental toxins that affect our health, but the added weight and complexity will hurt your fuel efficiency. You will also have to replace your 6.7 Cummins EGR cooler from time to time or the exhaust gas could overheat and damage the other components of your engine.

But the 6.7 uses a variable geometry turbo that automatically adjusts the flow of exhaust gas based on how much air the engine needs to increase power. This makes the 6.7 much more agile and responsive on the road compared to the 5.9. It produces more torque at lower RPMs, which will come in handy when you’re towing a large load.

Looking at the specs, these engines have a lot more in common than that which divides them. In fact, more than 40 percent of the 6.7L’s internals were carried over from the 5.9L, and the common-rail injection is essentially the same, but there a few differences worth nothing.

Consider the following when choosing between the 5.9 vs 6.7:

These engines tend to be an even match when it comes to on-road performance. They use the same common-rail injection system, but the 6.7 comes with 50 percent larger fuel rails, fuel rail feed lines, injector lines, and crossover tubes compared to the 5.9. That means the 6.7 can operate under slightly higher pressure with an additional 3,000 psi. The extra pressure produces additional torque and power by letting more fuel into the combustion chamber.

You also don’t need as much voltage to run the injectors on the 6.7 compared to the 5.9. Each injector on the 6.7 is rated for the vehicle’s electronic control unit, so you can’t attach injectors to different cylinders, which is possible on the 5.9. 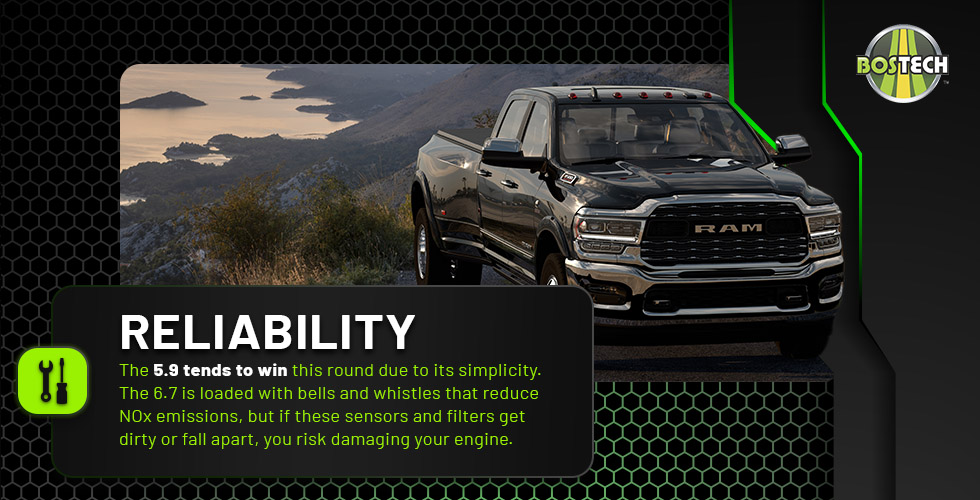 The 5.9 tends to win this round due to its simplicity. The 6.7 is loaded with bells and whistles that reduce NOx emissions, but if these sensors and filters get dirty or fall apart, you risk damaging your engine.

For example, excess NOx emissions will lead to a buildup of carbon, which degrades oil and coolant, two vital components for your engine. You’ll need to replace your Cummins EGR cooler and diesel particulate filter on a regular basis to keep your engine running the way it was intended.

Most 5.9 drivers don’t have to worry about these devices as long as the engine was made before 2002. Dodge added the EGR cooler to the 5.9 in 2002 to comply with changing emissions. This tends to be a common point of failure. You can find replacement Cummins 5.9 EGR coolers online to fix the issue.

The increased fuel pressure in the injection rail system on the 6.7 can lead to problems as well. The added psi can lead to gasket head failure. The seal between the cylinders and water jackets can also leak, which will cause the head to fail. They typically last around 200,000 miles or less. Alternatively, you shouldn’t have to worry about blowing the head on the 5.9. 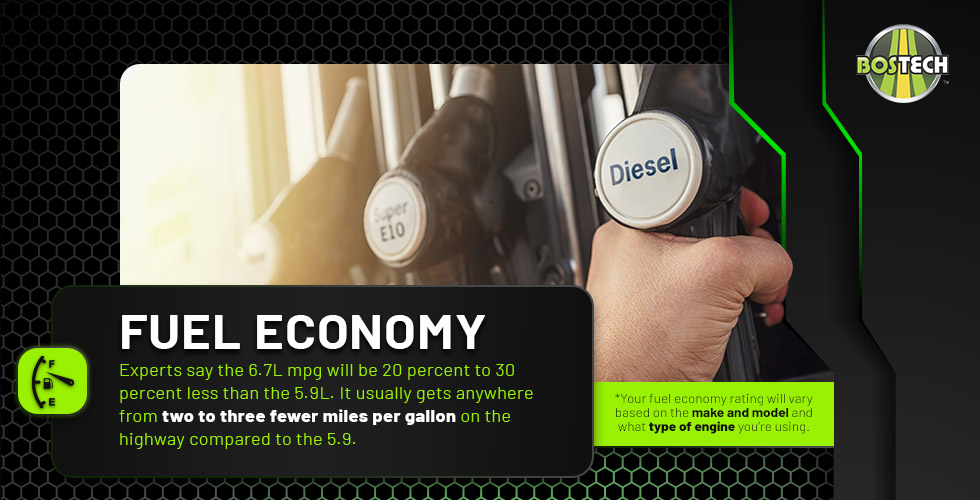 Your fuel economy rating will vary based on the make and model and what type of engine you’re using. The added complexity of the 6.7 saps fuel economy. Experts say the 6.7L mpg will be 20 percent to 30 percent less than the 5.9L. It usually gets anywhere from two to three fewer miles per gallon on the highway compared to the 5.9.

That’s because the 6.7 is heavier and needs more fuel to travel the same distance as the 5.9. Driving a 5.9 before the DPF and EGR cooler were introduced can help you save thousands of dollars at the pump per year. 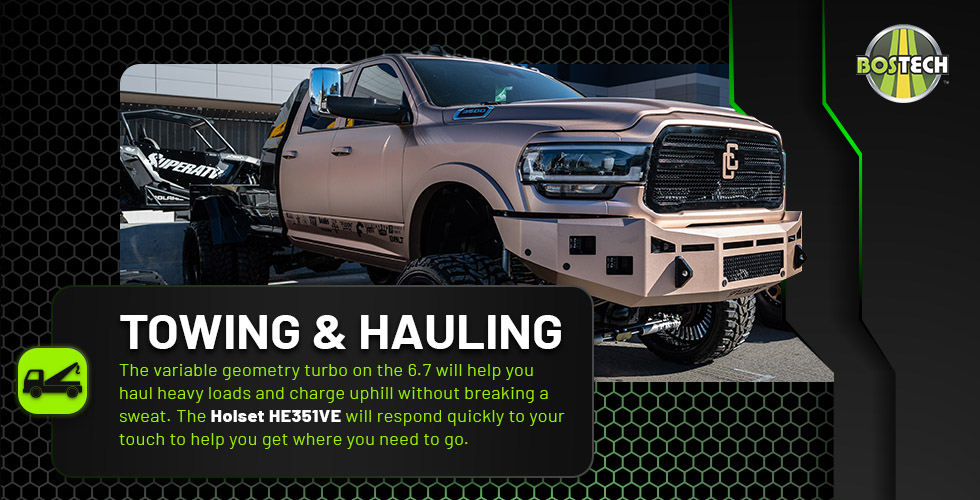 Most drivers prefer the added girth of the 6.7 when it comes to towing and hauling.

The variable geometry turbo on the 6.7 will help you haul heavy loads and charge uphill without breaking a sweat. The Holset HE351VE will respond quickly to your touch to help you get where you need to go. The device comes with a sliding sleeve that adjusts the turbine wheel to control the flow of exhaust gas. But the added complexity can lead to reliability issues. Carbon, soot, and other particulate matter can gunk up the variable turbo. The sliding sleeve can get stuck, which basically means the turbo stays wide open. Your truck will lag until it reaches higher RPMs. You can keep the exhaust brake engaged at all times to keep the sliding sleeve moving.

The exhaust turbo brake will also help you bring your heavy load to a stop. It decreases braking time by cutting off the amount of exhaust gas flowing into the engine, which creates backpressure to quickly slow engine speed. This also reduces wear and tear on the brakes. Safety and handling should be your first priority when you are hauling thousands of pounds of equipment.

Deciding Which is Best For You

Both engines come with benefits, but you’re bound to notice the difference as soon as you get behind the wheel. You need to choose an engine that will serve you well in every situation, especially if you drive work and your vehicle is your main source of income. A slight change in fuel pressure, performance, and handling can have a dramatic effect on your ability to earn a living.

If you need to tow and do most of your driving at low RPMs, the 6.7 is probably the best choice. It provides better on-road performance with a responsive turbo to help you get the job done. Reliability can be an issue, but if you make a point to replace your diesel parts before the problem spreads to other parts of your engine, you can limit how much time your vehicle spends in the shop. Keep replacement parts on hand to speed up the repairs process. 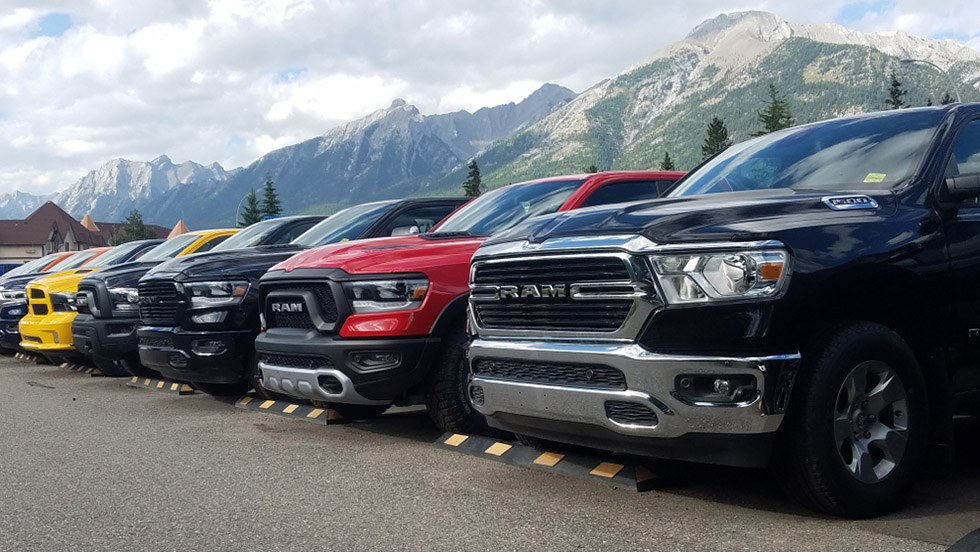 Driving the 6.7 also reduces your impact on the environment. Your vehicle will produce fewer emissions, so you and your co-workers can breathe easier on the job.

However, if you plan on driving at higher RPMs and don’t haul heavy loads for a living, you might be better off with the 5.9 instead. You will conserve fuel and you won’t have to worry about replacing sensors and electronic inputs that can fail over time for a more hands-off approach. If you don’t feel like messing with this technology, go with a 5.9 that was built before Dodge introduced the EGR cooler.

There are lots of factors to consider when choosing between the Cummins 5.9 and 6.7. It’s just a matter of how you plan on using your truck.